A major challenge in community and evolutionary ecology has been to describe how the composition of complex, multi-species communities and genetic factors interact to affect the evolutionary and ecological dynamics of species. For the past several years, we have been specifically working on this problem, focusing on the role of natural enemies (herbivores and pathogens) and competitors. 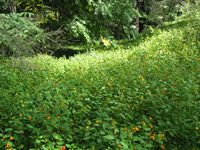 We are also investigating the role of phenotypic plasticity in interspecific interactions. Some of the best known examples of phentoypic plasticity in plants are intraspecific elongation responses to density, collectively known as the shade avoidance syndrome. One unknown question about the shade avoidance syndrome is its adaptive value when plants are surrounded by heterospecifics that they will be unable to overtop. Are different phenotypes and plastic responses selected for in the presence of interspecific competition as opposed to intraspecific competition ? Do we see local adaptation in habitats that differ in the levels of inter- and intra-specific competition?

We are also continuing quantitative genetics work in the lab, with the goal of approaching questions with at a mixture of theory, statistical analysis, and empiricism. In this area, topics of investiation include statistical methods for measuring natural selection and quantifying how strongly genetic constraints hinder (or accelerate) the rate of adaptation. Much of this work has been done in collaboration with Aneil Agrawal, Mark Rausher, and Mark Blows, among others. For more details, see our recent papers.

We also maintain an ongoing interst in the genetic analysis of traits that are best described by continuous functions. For example, growth and fecundity are often functions of age or developmental stage, and a host of physiological traits are best described as a function of temperature. While at Brown University, I joined a working group of mathematicians, statisticians, and evolutionary biologists who are developing new methods for understanding the evolutionary genetics of function valued traits. A major advantage analyzing functions is that curves and surfaces provide substantially more information than the landmark points used to estimate them. Work on this front is ongoing.

BACK TO RESEARCH PAGE